Crystal growth refers to the artificial synthesis of crystals and can be roughly classified into three groups, i. e. solid-solid, liquid-solid and gas-solid processes, depending on which phase transition is involved in the crystal formation. Among these three categories liquid-solid process is one of the oldest and most widely used techniques, which can be again divided into different subgroups according to the process medium.

Crystal growth from melt is undoubtedly the most popular method for growing single crystals at large scale. More than half of the technological crystals are nowadays obtained by this technique, including elemental semiconductors, metals, oxides, halogenides and chalcogenides.

Czochralski method, developed in 1971 by the polish scientist Jan Czochralski and later modified by several researchers, is one of the major melt-growth techniques. It is widely used for growing large-size single crystals for a wide range of commercial and technological applications. One of the main advantages of Czochralski method is the relatively high growth rate. 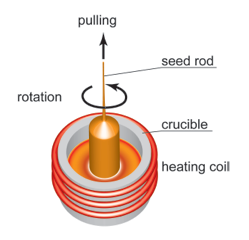 The material to be grown is first melted by induction or resistance heating under a controlled atmosphere in a non-reacting crucible. The melt is kept for a certain time at a temperature above the melting point and the temperature is then reduced to a value slightly above the freezing point.

The freezing point is judged by cooling the melt until crystals start to appear on the surface. After a further lowering of the temperature a seed (cut in the appropriate orientation) is inserted into the melt. By pulling and rotating the seed simultaneously a crystallization center forms. The diameter of the pulled crystal is controlled by manipulating the temperature of the melt and the pulling rate. Suitable engineering of both axial and radial temperature gradients is needed to grow single crystals of desired dimensions reliably. 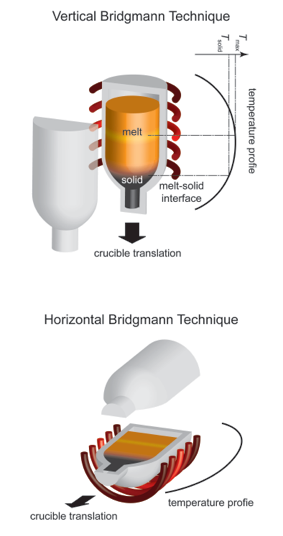 The principle of the Bridgman technique is the directional solidification by translating a melt from the hot zone to the cold zone of the furnace. At first the polycrystalline material in the crucible needs to be melted completely in the hot zone and be brought into contact with a seed at the bottom of the crucible. This seed is a piece of single crystal and ensures a single-crystal growth along a certain crystallographic orientation. Part of the seed will be re-melted after the contact with the melt. This provides a fresh interface for the crystal growth.

The crucible is then translated slowly into the cooler section of the furnace. The temperature at the bottom of the crucible falls below the solidification temperature and the crystal growth is initiated by the seed at the melt-seed interface. After the whole crucible is translated through the cold zone the entire melt converts to a solid single-crystalline ingot.

Instead of moving the crucible, the furnace can be translated from the seed end while the crucible is kept stationary. In this manner a directional solidification can be achieved, too. A further modification is the so called gradient freezing technique, with which neither the crucible nor the furnace needs to be translated. Instead, a translation of the temperature gradient is implemented by using a multiple-zone furnace wherein the power to each zone is programmed and controlled by individual controllers. This system can maintain the same temperature gradient at the liquid-solid (i.e. melt-crystal) interface, which changes in turn its location with time during the growth. Analogous to the Bridgman technique, the gradient freezing technique can also be realized in vertical and horizontal configurations.

Verneuil method (also called flame fusion technique) was one of the earliest melt techniques used to grow large quantity of crystals with high melting temperature. It was first introduced by the French chemist Auguste Verneuil and originally developed for producing synthetic gemstones. Today the technique is still used to grow a variety of high-quality crystals such as corundum, spinel, rutile and strontium titanate, which are widely applied in laser devices and precision instruments, as well as in thin film technologies as substrates. 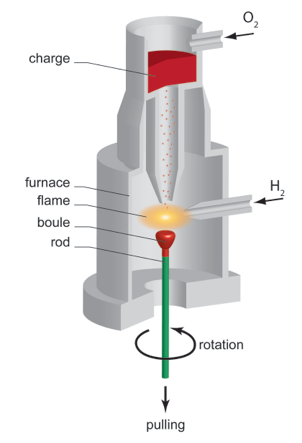 The Verneuil process involves essentially a furnace with oxygen and hydrogen supply, highly fine powder source as starting material and a support rod either with or without a seed crystal depending on the desired crystallographic orientation of the crystal to be grown.

During the crystal growth, the source material is continuously released into the furnace chamber through a narrow tube and mixed with compressed oxygen. At the outlet of the tube the powder is fed into an oxygen/hydrogen flame of about 2200 °C. As the powder passes through this flame, it melts into fine droplets which fall onto the support rod. A sinter cone is gradually formed by the droplets and serves as a seed for crystal growth. As more droplets are fed to the seed the support rod is lowered slowly from the flame, allowing a cylindrical single crystal, a boule, to form. The term boule originates from the French word for swelling and refers to the ball-like appearance of the first resulted crystal. Typical produced boules grow up to about 100 mm in length and 15 to 20 mm in diameter, although the cross-section of the boule is not always circular. After growth the boule is parted lengthwise to relieve internal stress and avoid fracture.

The Kyropoulos method was initially developed for growth of large alkali halide crystals by the German scientist Spyro Kyropoulos. Later large sapphire crystals were also grown by using this method. In the 1930s and 1940s it was considered to be one of the most advanced techniques for growing large single crystals, before Czochralski technique started to demonstrate its significance by being successfully applied to grow silicon and germanium crystals. The main distinction between Kyropoulos and Czochralski is the different crystal shapes and the solid-liquid interface curvature.

Similarly to Czochralski method, source material must first be heated to a melt in a crucible within Kyropoulos method. The crystallization initiates at the solid-liquid interface between the melt and the seed crystal by a slow and smooth cooling of the melt. At the early stage of the process a sharp cone directed into the melt forms at the seed crystal. Instead of pulling the seed upwards out of the melt like in Czochralski method, the crystal develops downwards in the melt with increasing diameter and decreasing melt level. Once the crystal reaches the bottom of the crucible the process is finished. This results at the end in a crystal dimension almost equal to the diameter of the crucible and an ellipsoid rotation form. Sapphire grown by Kyropoulos method can reach a diameter of more than 350 mm and weighs over 80 kg. Ratio of diameter to height can vary in the range of 3:1 – 1:3.

Zone refining, a precursor of floating zone technique, was first developed by W. G. Pfann in 1951 at Bell Laboratories and later modified by different people independently. Originally the floating zone technique was used for manufacturing silicon crystal, but today it can also be applied for growing single crystals of various congruently and incongruently melting oxides. 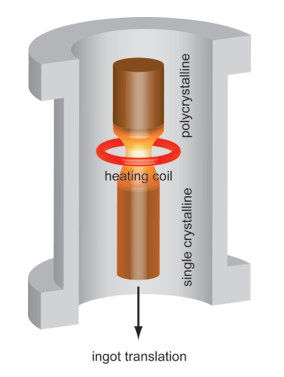 During the floating zone process, a polycrystalline crystal is translated slowly through a heater and a narrow region on the crystal will be molten (floating zone). At the liquid-solid interface, the impurities diffuse from solid region into liquid region and segregate at the end of the ingot after the whole crystal passes through the heater. In order to grow a single crystal, a seed crystal having a certain orientation needs to be brought into contact with the molten region at the beginning of the process.

The main advantages of the floating zone technique are that no crucible is necessary, which results in a high purity of the grown crystal, and both congruently and incongruently melting materials can be grown by this method.